The principle of selflocking of the THU nut is to compress the thread of the flank of the male element on two sectors located on the same plane and symmetrically opposite.

The plane of the sectors being perpendicular to the axis of the threading of the nut.

This principle is obtained by making two calibrated slots in the upper turret of the nut which are then crushed under a specific load to obtain a permanent deformation of the two slots (elastoplastic deformation).

During the assembly, the deformed slots in the upper turret of the THU nut are pushed by the thread of the male element. This push generates pressure on the male element’s net flank over two sectors creating a constant braking torque (called self-braking). This self-locking torque is independent of the torque applied when tightening the THU nut. 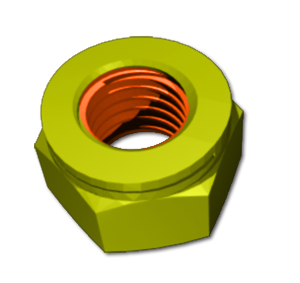